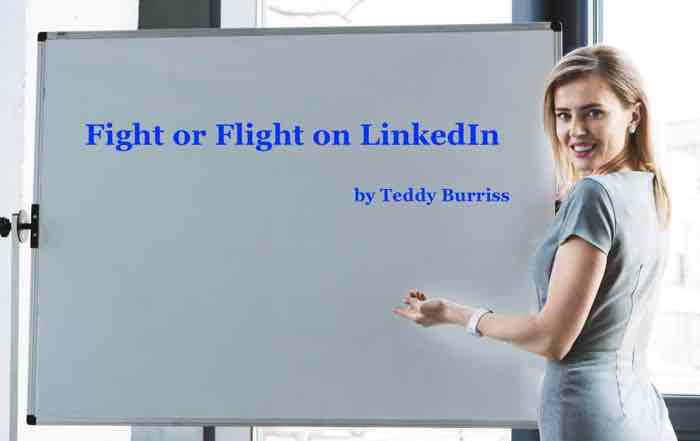 Many of us have had it done to us in one way or another.

We post an article, video, image, our ideas or perspectives into a LinkedIn Post and someone jumps into our conversation with a negative, sometimes hateful comment.

When this happens we generally have one of two reactions.

The first reaction is ‘Flight’.

This reaction is where we publicly ignore the negative/hateful comments on our posts.

Dale Carnegie taught me to ‘Never Criticize, Condemn or Complain’. I believe Dale would have approved of my regular flight reaction to negative and hateful comments on social media.

To me, flight means I will never publicly respond to these comments in any way.

Sometimes I’ll delete the comment if it’s truly a hateful, disrespectful and/or irrelevant response to my post or another comment in the thread, so others in the conversation do not fuel the negative/hateful debate.

Sometimes if the responder is someone I have felt some level of trust/respect for in the past, I’ll send them a LinkedIn message and ask them to ‘please be careful when responding to my posts on LinkedIn.’ I’ll only do this twice before I block/report and un-connect from the repeat offender. I have only had to do this twice in the past 11 years.

Even though periodically I share a post that another LinkedIn Member may disagree with, the majority of my posts on LinkedIn do not solicit negative/hateful responses. I attribute this to the professionalism of my LinkedIn Network, thank you.

My flight reaction is only in regards to comments that are hateful, disrespectful and/or ugly in nature. I won’t walk away from a comment from a LinkedIn Member that disagrees with me. This is an opportunity for creative collaboration. Sometimes I’ll show creative curiosity and ask an open-ended question in a constructive way.

The second reaction to negative/hateful comments is ‘Fight’.

This occurs when we publicly attack those who comment with negative and/or hateful words. The energy put into a fight reaction on LinkedIn can range from simple yet equally negative words to a long drawn response of negative words in an effort to show those in the conversation how wrong, ridiculous, ignorant and/or uneducated the responder feels the original commenter is.

There are a few problems with responding to negative/hateful comments in this manner.

First of all pay attention to what George Bernard Shaw said; “Never wrestle with a pig. You both get dirty and the pig likes it.”

I was always taught, “Don’t stoop to their level, you’re better than that.” Additionally, I repeat what Dale Carnegie taught me, “Never Criticize, Condemn or Complain.”

It may ‘feel good’ for a moment as you hit that Post button shouting, “Take that!”, however, this feeling is short lived and offers no value to those in the conversation.

Secondly, when you get into a ‘war of words’ with these negative/hateful commenters, you’ll kill off any worthwhile engagement on that post. Most business professionals will swipe up and away from all posts that have arguments going on in the thread. We don’t want to be found in these conversations, regardless of which side of the argument others would perceive we land on.

I strive to live by this edict; “Never do, say or engage in any way you don’t want to be seen, heard or perceived of in life.” @TLBurriss

Also, I do not believe I am responsible to ‘call someone out publicly’ for their negative/hateful words, especially on social media. I don’t believe we can change how others feel and/or act through the words we use in a social media comment or reply. If I want to influence someone in a meaningful way I know the best way to achieve this is through a face to face or at least ear-ear conversation. Unfortunately, social media arguments are more likely to explode, not resolve because all they see are the words. Positive influence occurs through tone and body language.

The purpose of sharing all content/engagement on LinkedIn should be to encourage meaningful conversation that presents you as an authority relevant to what you shared and/or engaged on.

The ultimate goal of sharing/engaging on LinkedIn is to become trusted, respected and even liked in order for your target audience to want to engage with you in business conversations.

The moment we allow and/or encourage (via response) negative/hateful debate on our posts and comments, we are in fact destroying any business value behind those posts and comments and in many cases, negatively impacting our professional and/or personal reputation.

What are your thoughts?